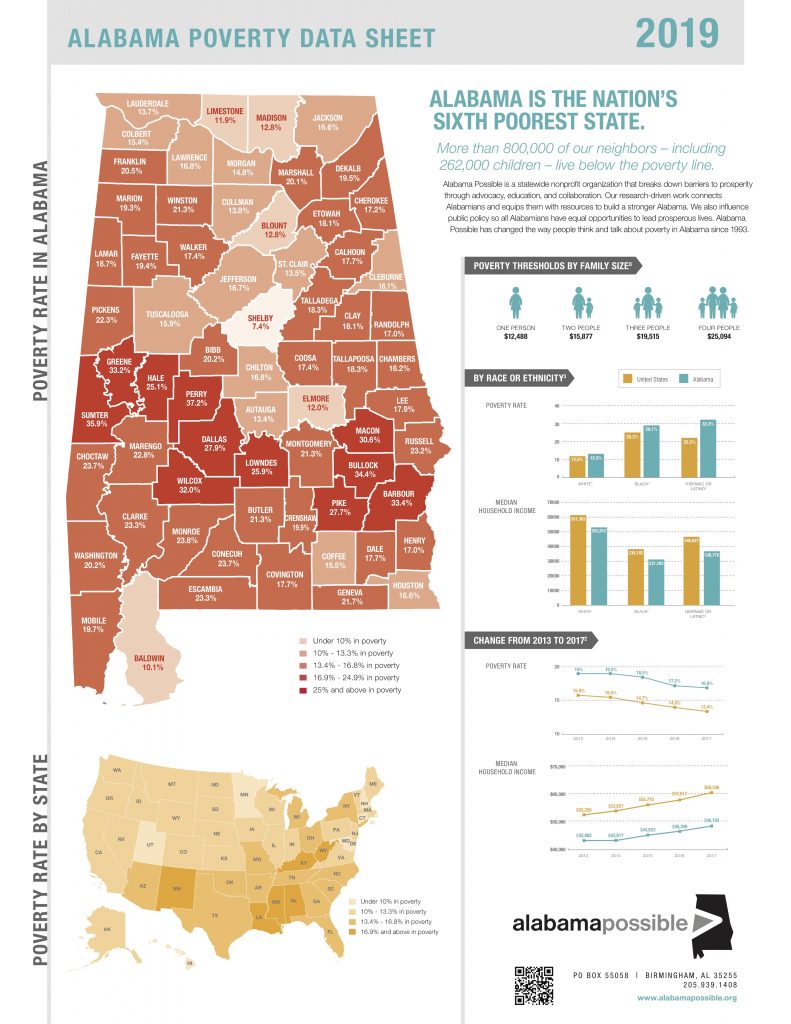 Alabama’s poverty rate of 16.9% is more than three points higher than the national average of 13.4%. The number of Alabamians living in poverty has decreased slightly over the past five years. However, sustained investments in education, the creation of good jobs, and asset building are necessary for Alabama families to achieve long-term financial security.

“Living in poverty is like running in place. Too many Alabamians are working hard just to make ends meet. Stagnant social mobility, increasing inequality, and the rise of low-wage jobs without benefits impact both low-income and middle-class Alabamians,” said Kristina Scott, executive director of Alabama Possible. “Public policy has a vital role to play to give low-income Alabamians a chance to move into the middle class and ensure greater security for those already there.”

• Alabama is the sixth poorest state in the U.S., and 16.9% of Alabamians live below the federal poverty threshold – a noticeably larger percentage than the national average of 13.4%. The federal poverty threshold ranges from $12,488 for one person to $25,094 for a family of four.
• At a county level, 11 of Alabama’s 67 counties have a poverty rate higher than 25%. Seven counties have a poverty rate higher than 30%. Shelby County is the only Alabama county with a poverty rate of less than 10%.
• The gap between Alabama’s median household income and the nation’s continues to grow. Alabama’s median household income is $48,193, or $12,143 less than the national median of $60,336.
• Single mothers experience significantly higher rates of poverty in Alabama. More than 47% of female-headed households with children in Alabama report income below the poverty threshold, as opposed to 38.7% nationally.

Please use the Poverty Data Sheet to guide your policymaking efforts by convening stakeholders, focusing attention on the need, cultivating high aspirations, and supporting work that effectively removes barriers to prosperity in Alabama.

Explore the new interactive Poverty Data Dashboard. You can see poverty data at the state, county, and census tract level.

Join the conversation on social media by sharing why you think Alabama is more than a number by tagging us @alabamapossible and using the hashtag #morethananumber.