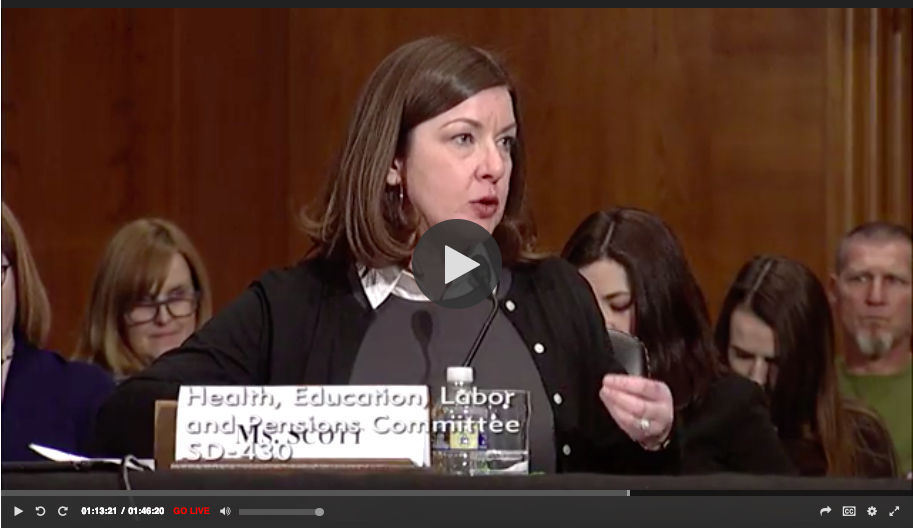 Kristina Scott, executive director of Alabama Possible, testified Tuesday before the U.S. Senate Committee on Health, Education, Labor and Pensions at the “Reauthorizing the Higher Education Act: Simplifying the FAFSA and Reducing the Burden of Verification” hearing. Scott spoke about the need to simplify the Free Application for Federal Student Aid (FAFSA) and ease the burden of verification to reduce barriers to enrollment.

“Streamlining the FAFSA will provide low-income families with the financial and emotional relief they need when preparing for college,” said Scott. “The American economy depends on having a qualified workforce. Making postsecondary education more accessible and affordable for families by streamlining the financial aid process will result in a stronger, more prosperous nation.”

Scott provided members with three recommended approaches to increasing college access. She advised the need to streamline the FAFSA to 15-25 questions about the student, their family and where they want to go to college. She also advocated that the FAFSA process focus on grants and other assistance for which families qualify instead of what a family is expected to pay. Finally, Scott recommended decreasing the verification burden since an estimated 25 percent of applicants abandon the financial aid process after being flagged for verification.

In her testimony, Scott highlighted that a low-income student is only half as likely as a high-income student to complete a postsecondary certificate or degree by age 26, but those low-income Americans who do obtain a college degree are five times more likely than their peers to rise out of poverty.

You can read the complete text of her testimony here.

Alabama Possible leads the Cash for College Alabama campaign which promotes FAFSA completion. During the 2017-18 school year, Alabama had the nation’s fourth-largest increase in FAFSA completions, and Alabama families accessed more than $72 million in grant aid to pay for education after high school. Cash for College Alabama is a partnership of Alabama Possible, the Alabama State Department of Education, Bold Goals Coalition of Central Alabama, and the Alabama Media Group. Additional collaborators include the Alabama Commission on Higher Education and the Alabama Community College System.