Poverty is down. Income is up. We still have work to do. 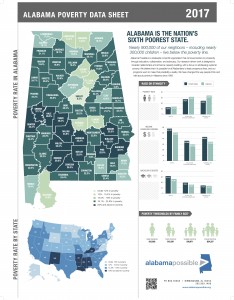 Because poverty is so common in Alabama, it can be hard to see. These families are our relatives, our friends, our co-workers, and our neighbors. But they face numerous barriers that result from not having enough money, food, shelter, health care, education, or other necessities of life.

Here’s what the latest data shows:

Please use the data sheet to guide your policymaking efforts by convening stakeholders, focusing attention on the need, cultivating high aspirations, and supporting work that effectively removes barriers to prosperity in Alabama.