Hunger is not a rite of passage. Yet nearly half of college students face the risk of hunger, according to the study Hunger on Campus. 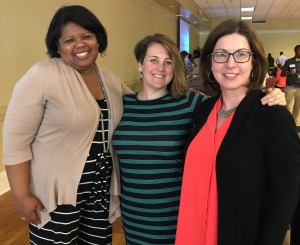 “These students are not the archetypical ‘poor college student,’ who spend too much on beer and live on Top Ramen. Their hands shake because they have not eaten in two days,” said College and University Food Bank Alliance Co-Founder Clare Cady at February’s Hungry for Justice summit co-sponsored by Alabama Possible and Troy University.

“You must know your campus, know your resources, and understand your limitations,” said Stidum.

Cady stressed the importance of involving students in campus food programs because “student power is the best power!”

During lunch, an AmeriCorps volunteer and students from Troy University, Auburn University and The University of Alabama shared what they learned from their involvement and experience.

The emphasis on student advocacy continued after lunch, when students led roundtable presentation about their campus-based service, research, and advocacy.

Auburn Students Abigail Binion and Veronica Vichi-Miller are researching the prevelance of hunger on the Auburn campus and said “it surprised us.” 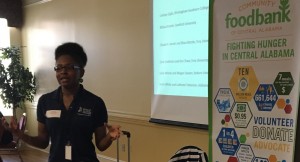 “A lot of college students do not understand that they may qualify for the Supplemental Nutrition Assistance Program (SNAP),” said Samford social work graduate student Misha Streater, an intern at the Community Food Bank of Central Alabama. 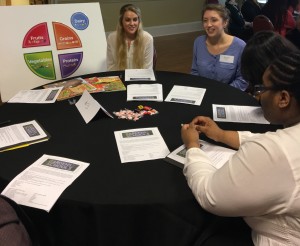 The conference concluded with discussion groups that reported takeaways from the conference and their discussion. The student discussion group wanted to broaden safe places by reducing the stigma surrounding food insecurity and hold institutions accountable for not addressing the issue. To do this, they agreed to openly about how many students are at the risk of hunger. Educators reported that they will normalize the conversation surrounding food issues and focus on a relational approach with students. To accomplish this, they will talk more openly to their peers and students about the issue and give their students individualized attention.

Auburn University Director of Public Service Ralph Foster said that “we need to rethink the way we present our resources instead of ‘referring’ students if they have a ‘problem’ .