REPORT: HALF OF ALABAMA’S SINGLE MOMS LIVE IN POVERTY 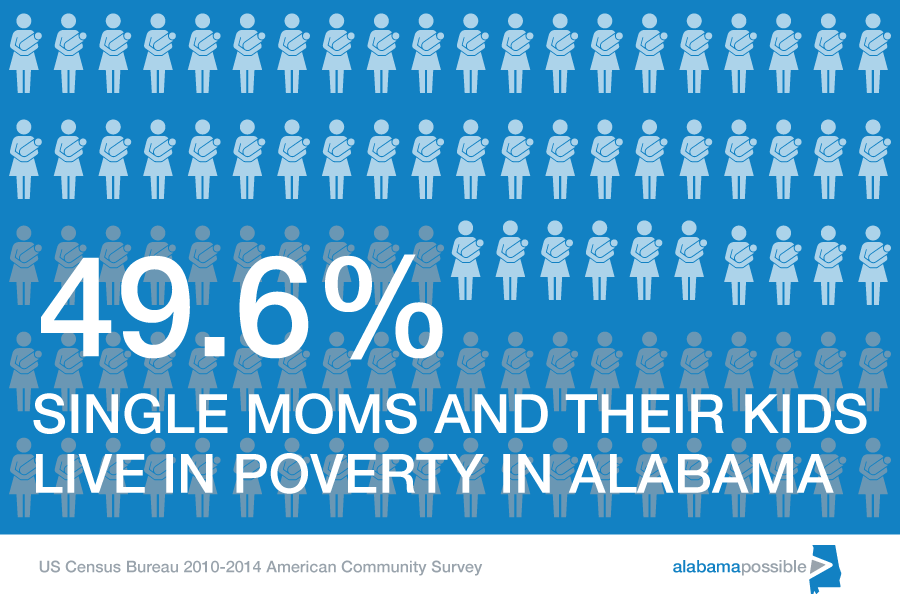 REPORT: HALF OF ALABAMA’S SINGLE MOMS LIVE IN POVERTY

Census data reveals that 49.6 percent of single mothers in Alabama live in poverty

Alabama Possible’s analysis also revealed an increasingly high-rate of poverty among single mothers. Defined as “female householder, no husband present with related children under 18,” this category of Alabamians experiences poverty at a rate of 49.6 percent in Alabama—the third highest rate in the country.

“Alabama has a distressingly high number of children who live in poverty,” said Kristina Scott, executive director of Alabama Possible. “Many of these children are raised by single mothers. We can’t stop the cycle of poverty without taking a holistic approach that improves outcomes for both children and the adults in their lives.”

Topping the list of Alabama counties with poverty rates among single mothers exceeding 70 percent are:

This recent data release provides context for recent reports that 298,929 of Alabama’s kids live in poverty. According to The Women’s Fund of Greater Birmingham, 55.6 percent of single mothers and their children in Birmingham live below the poverty line.

“Single mothers and their children are more likely to experience poverty because they face more obstacles,” said Jeanne Jackson, CEO of The Women’s Fund of Greater Birmingham. “These obstacles include wage and wealth inequality, lack of affordable childcare, and barriers to higher education. Because the obstacles are multi-generational, the solutions must be as well.”

Alabama Possible is a statewide nonprofit organization that works to remove barriers to prosperity through advocacy, education and collaboration. Our research-driven work is predicated on relationships and capacity building, so that the state of Alabama can reach its full potential. Alabama Possible has been working to change the way people think and talk about poverty in Alabama since 1993. For more information, visit AlabamaPossible.org.

About the Women’s Fund of Greater Birmingham

The Women’s Fund of Greater Birmingham inspires women to use their philanthropic power to create positive change for women and their children through collaboration, grantmaking, and advocacy. For more information, visit womensfundbirmingham.org.