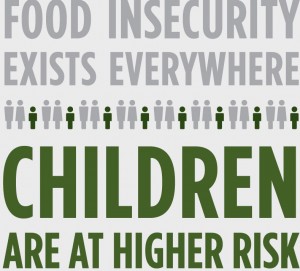 According to the Map the Meal Gap study today released by Feeding America, 19.4 percent of Alabamians were food insecure in 2011.

Food security means access by all people at all times to enough food for an active, healthy life.

“Hunger hits closer to home than many of us think. Based on this data, we all probably know someone who isn’t sure where their next meal is coming from,” said Kristina Scott, executive director of Alabama Possible-Alabama Poverty Project.

Children are more likely to be food insecure than adults, and 26.4 percent of Alabama children lived in food insecure households. Child hunger is linked with poor health and educational outcomes.

Alabama is the nation’s sixth poorest state, and 19 percent of Alabamians and 28 percent of children live in poverty.

According to the Fe

eding America analysis, Macon and Greene Counties were both in the Top 10 majority African American counties within high food

Macon County, which has a poverty rate of 31 percent and a median income of $27,591, also is one of the nation’s highest food insecure and highest food cost counties.

“Hunger is a solvable problem. Emergency food assistance is just the start, however. In order to ensure no Alabamian goes hungry, we need to explore local food systems, economic development, community support systems, and civic engagement for sustainable solutions to build a food secure and thriving community,” said Scott.

Alabama Possible-Alabama Poverty Project (APP) is a statewide nonprofit organization dedicated to reducing systemic poverty and its root causes across Alabama. APP educates Alabamians about poverty, motivates colleges and faith-based institutions to engage in poverty-reduction activities, and advocates for fact-based policy decisions. APP was founded in 1993 and is based in Birmingham. For more information visit http://www.alabamapossible.org.

Feeding America is a nationwide network of more than 200 food banks that leads the fight against hunger in the United States. Together, we provide food to more than 37 million people through 61,000 food pantries, soup kitchens, and shelters in communities across America. Feeding America also supports programs that improve food security among the people we serve; educates the public about the problem of hunger; and advocates for legislation that protects people from going hungry. Visit www.feedingamerica.org