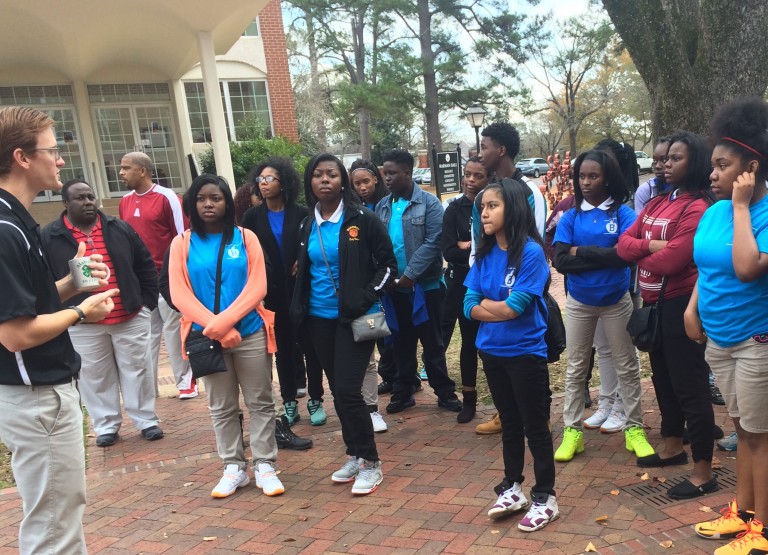 Wenonah ninth grade students are guided on a tour of the University of Montevallo’s campus.

“We want students to be inspired by being on campus and visualize themselves at the schools by spending time quality time with their Blueprints mentors,” said Alabama Possible Program Manager Elizabeth Parks.

A group of 19 Montevallo High School juniors went to Troy University.  While on campus, they visited the student center, classrooms, and on-campus housing. They got to meet with Coordinator of Student Involvement and Advisor to the National Pan-Hellenic Council Chris Hager and learn about extracurricular activities including Greek life, club sports, and special interest groups like Quidditch. According to the students, the day’s highlight was eating lunch in the cafeteria with a group of Troy undergraduates, who served as their mentors for the day.

While at Shelton, the Hillcrest students learned about the college’s academic and technical education programs, including nursing, fine arts, drafting and cosmetology. They also visited Shelton’s wellness center, which has extensive nutrition and fitness offerings.

The Hillcrest students then went to the UA campus to learn about what a four-year college has to offer. They had lunch in the Lakeside Dining Hall and toured a typical freshman dorm. The students also had the chance to meet Blueprints Founder Nicole Bohannon about the program’s history, and the afternoon ended with a question and answer session with current UA students about their college experiences.

A mixture of ninth and tenth grade Blueprints students at Birmingham’s Wenonah High School visited theUniversity of Montevallo.  They had previously visited UAB and Lawson State Community Collegewith Birmingham Education Foundation, so this field trip was a chance for them to experience a small, public liberal arts college. The students met with an admissions counselor to start off the tour. The tour of campus consisted of dorms, classrooms, and the student center. While on the tour, the guide told the students about the many ghost stories that are well known by the students of UM. The students also ate lunch in the cafeteria with many Montevallo students.

“I learned that Montevallo is a school where you can get familiar with everybody because the classes are so small. I like that,” said Charles Ball, Fall 2015 Wenonah Blueprints Valedictorian.