Obesity, poverty, and the food system

According to a new report F as in Fat: How Obesity Threatens America’s Future, Alabama is still the second most overweight state in the country. Over two-thirds of Alabama adults are either overweight or obese.

Last night, I attended a discussion on food security at the UAB School of Public Health.  Here are some of the speakers’ thoughts about the obstacles to healthier eating: 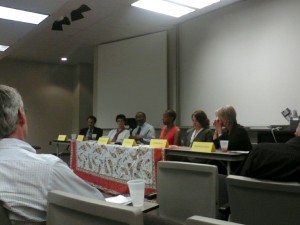 For some working families, nutrition may seem like a luxury. According to Paulette Van Matre ofMagic City Harvest, “food is the last thing many families think about.” Rent, utilities, childcare, and transportation are all immediate expenses that come first. And Paulette notes, “100,000 people in the greater Birmingham area don’t know where their next meal is coming from. So if you’re in that situation, nutrition is way down on your list of requirements.”

Another obstacle to accessing healthy food? Food deserts.  Sam Crawford of Main Street Birmingham tells the story of one woman at a bus stop who vividly illustrated this point. “I asked her where she was going. She said she was taking the bus to the grocery store. I asked her, how long did it take her to get there? She said it took her two hours just to get dropped off within six blocks of the grocery store. Then I asked how long she had been waiting. She said she had been waiting over 45 minutes for the bus. Sometimes, she said, the bus never came.”

Sally Allocca from East Lake’s P.E.E.R., Inc. confirmed that she drives several miles to shop at a decent grocery store while many people in her community lack such transportation. She mentioned going into a local market recently and seeing “brown corn and a rotten, mushy watermelon sitting in the bottom of a produce case.” Main Street Birmingham is working to address this problem by linking grocers with access-poor communities with their Urban Food Deserts survey.

According to Ama Shambulia of the West End Community Gardens, many families have lost the art of cooking. “Even if you can buy healthy food, do you know how to prepare and eat it? In many households, the kids don’t, and the moms don’t either.” Through training and classes at WE gardens, Ama is helping kids to grow, prepare, and eat fresh foods. She also offers trainings to support adults in making healthier choices. During their fall collard greens cook off, for example, they work on cooking greens “without adding half a hog.”

Edwin Marty of Jones Valley Urban Farm notes that “children have to be taught what is food and what isn’t. It’s not something you’re born knowing.” As one panelist noted, if children grow up eating chips and soda for breakfast, they’re not going to learn how to make healthy choices. Parents play an important role in this, as do school lunch program, teachers and farm-to-table programs. TheHealthy Kids, Healthy Communities grant is working on this issue in Jefferson County.

Many working families are crunched for time, and preparing fresh or healthier foods seems like a hassle. Instead, people from all socioeconomic backgrounds rely on prepared foods, restaurants and fast food. “It’s the new American way,” notes Ama. Changing the food culture, and demonstrating that “a meal doesn’t even have to be cooked,” may be a revolutionary concept. Yet without education about healthy eating habits, trying new foods can be intimidating.

Want to be a part of the solution? Join in the discussion by attending Birmingham’s 3rd annual Food Summit in November.  We’re helping plan the event, featuring Alabama’s top food reformers and national experts.  UPDATE: The Food Summit has been scheduled for November 12-13, 2010. Submit program proposals to bhamfoodsecurity@gmail.com by August 15.